What can we do to combat the stigma of dyslexia?

Ask an Expert: What can we do to combat the stigma of dyslexia?

Stigma is a great problem in dyslexia. It's even sometimes been a worry- if we could screen perfectly, would we set low expectations for a child?

If we could perfectly identify a child at risk in kindergarten- which is our dream in one sense, to intervene early and never let that child fail - I think there is also a sort of a social and moral issue that we have to be careful about, which is not to diminish the expectation of that child's future, either from the viewpoint of the school, but most important from that child.

But again, if we could make it less mysterious- if we could just say, if you break your wrist you get a cast, if you don't see so well at a distance you get glasses, and if reading is a bit of a thing for you, you know, you get a little bit of an educational support for that, as well.

If we can make it very objective and scientific, then I'm hoping we can drive away the sense of stigma and just say it's another element of human diversity -- and one happily that we can support, so that the rest of a child's promise fully flowers in that child.

John Gabrieli is a neuroscientist at MIT, and an associate member of the McGovern Institute for Brain Research. He uses imaging and behavioral tests to understand how the human brain powers learning, thinking, and feeling. 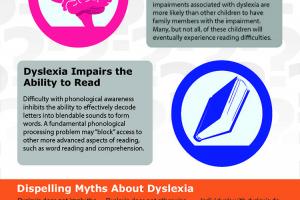 Dyslexia is a brain-based learning disability that specifically impairs a person’s ability to read.

This fact sheet discusses the signs, symptoms, and supports for dyslexia.

5 Questions Parents and Educators Can Ask to Start Conversations About Using Terms Like Learning Disabilities, Dyslexia, Dyscalculia, and Dysgraphia

Here are questions parents and educators can ask to clarify the terms: dyslexia, learning disabilities, dyscalculia, and dysgraphia.