How does the brain change with a successful dyslexia intervention?

Ask an Expert - How does the brain change with a successful dyslexia intervention?

I think what people are showing with the brain imaging is that there’s a lot of convergence in terms of where the brains of people with dyslexia differ. And even if you’re in countries using different languages and even using different writing systems, there are some underlying common differences that we see. I think where it gets really more interesting and somewhat more complicated is when you look at interventions.

We are very interested in seeing: what is the brain correlate of a successful intervention? What happens to people with dyslexia when they get better at reading? Then what kicks in? Is it the same brain areas that all readers use? Is it different? Is it a compensatory strategy? Do they just abandon the areas that they would normally use? Was it a combination of both trying to use more of the areas that they weren’t using before with additional areas that kick in?

And that’s where I think the research is really very interesting because again, it speaks for the nature of the reading difficulties. And why are the areas that now chime in: why those? What is it that they do to help us become skilled readers? And it’s sort of a combination of those two, which is what we see. And I think, in part, that will also be a function of the nature of the intervention. People use very different types of interventions to try and help kids read.

Really the ones that we subscribe by are the ones that address decoding, that are very explicit and very direct. But it’ll be interesting to see how not just the outcome changes in terms of their reading ability but also the nature of the differences in the brain depending on the kind of instruction, perhaps depending on the kind of intensity of instruction, how many hours or if you do it over a longer period. And those are all questions that haven’t been asked yet by science, but they will be soon.

I think the field is at a point where we see convergence in terms of that there are some areas that do seem to actually kick in following the intervention, but there’s also compensation that people report right hemisphere changes that seem to speak to compensation. The nitty-gritty of these are somewhat different between studies, and that could be explained by the different tasks that people are doing in the scan and the different interventions that are being used.

And I think more research there of course will be helpful, but I think there’s a general understanding that we can identify changes that follow interventions. And I think it will be interesting to look at those in different languages and in different writing systems and so on.

Guinevere Eden is a Professor in the Department of Pediatrics and Director of the Center for the Study of Learning at Georgetown University. She works in the area of neuroscience with a primary focus on the brain-bases of dyslexia. 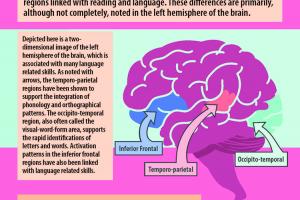 Studies report fundamental differences in brain development and activation patterns between individuals with dyslexia and those without.

Dyslexia and the Brain: What Does Current Research Tell Us?

Read this webpage to learn about dyslexia and the brain.

Reading and the Brain video

Created by IDEA 2004, the National Instructional Materials Access Center is a federally-funded, searchable online file repository of K-12 print textbooks in the XML-based NIMAS format. State agents may be able to access or request acessible texts for students with print disabilities.